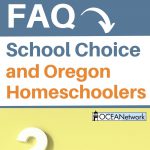 At first glance, it may seem like School Choice initiatives are an obvious benefit for parents. However, homeschoolers must be aware that taking government funds with School Choice Accounts (SCAs) invites consequences that threaten homeschool freedoms.

This year (10/21) OCEANetwork sent out an alert about a School Choice initiative that Oregon history indicates will likely negatively impact homeschool freedoms. There have been several questions that have arisen as parents learn about these concerns. The FAQ below are a work in progress and will be updated to answer questions as they come up.

If you have a question you do not see on this page, review our post and alert for more information. If it’s not addressed there, you can contact us.

What is School Choice?

School Choice isn’t just about choice of education. Oregonians already have many choices when it comes to educating their children. School Choice is code for using government funds for education.

Why Should Oregon Homeschoolers Be Concerned?

What is the School Choice Amendment OCEANetwork Sent the Alert About?

In 2021, the School Choice Amendment (which you can read here), was filed by the grass-roots organization Educational Freedom for Oregon on behalf of public, private, and homeschool parents. The initiative petition introduces a change to the Oregon Constitution and includes homeschoolers as recipients of government funds. Read our alert to learn why OCEANetwork opposes this initiative petition.

Doesn’t the School Choice Amendment Include Language to Protect Homeschoolers?

Unfortunately, those protections for homeschools are limited to protecting “creed, education practices, admission policy, and curriculum” and leave much unprotected. They do not prevent the Legislature from requiring homeschool parents to have a college education, or to change the definition of “satisfactory educational progress” to be more strict, or to require in-home visits from school officials. The Oregon Legislature and Department of Education have been very creative in the past with proposed language restricting home education freedoms in Oregon.

Again, our best protection against regulations has and continues to be our excellent academic results and the fact that homeschoolers DO NOT take public school funds. When homeschoolers start taking those funds, they not only put their own freedoms at GREATER risk, but those of other homeschoolers, even those who chose not to take government funds.

Aren’t Possible Additional Regulations Only a Threat for Those Requesting School Choice Accounts?

Unfortunately, no. To the Legislature and the general public, all in-home teaching is “homeschooling.” Rules for SCA homeschoolers are likely to apply to all homeschoolers whether or not they opt-in School Choice Accounts.

That’s for two reasons: 1) the proposed amendment is not clear about whether they are creating a new category of in-home learning; 2) the Legislature will be highly motivated to protect the limited amount of money they have for school funding.

Neither homeschool students nor private school students are included in school funding. The budget only includes students in public schools and public charter schools (some of whom support in-home learning). Private schools and home schools save the state millions of dollars each year. It’s not money they are sitting on just because our children are not in school. School Choice money is money the government would have to gain by taxing everyone more.

Doesn’t the Legislature Already Have the Authority to Impose Restrictions Anyway?

Yes, as stated in our alert, the Legislature already has the authority to impose restrictions on homeschoolers. However, they have been relatively unmotivated to do so as we have not threatened to take their money.

If homeschoolers start taking School Choice funding, we no longer have the argument that the government shouldn’t control homeschools because we don’t take government funds. In fact, we will be inviting regulations and countermeasures instead.

Can’t Homeschoolers Just Choose to Not Opt-In If They Don’t Want the Funds?

Some argue that the Amendment does not threaten homeschool freedoms because it does not force all homeschoolers to take the funds, but rather provides an opt-in. They say those worried about government overreach can just not take the money by not opting in.

However, the amendment language is not clear and does not provide protection for those who choose not to opt in. History also illustrates that “just don’t take the money” misses the point. Even if many homeschoolers reject the government money and do not opt-in for the SCA, they could (and would likely) be forced to accept the accompanying restrictions. Read this article for more information.

Doesn’t the Fact That it Will Change the Oregon Constitution Mean We Don’t Have to Worry About the Legislature?

There are three levels of law at play here. The initiative petition is amending the Oregon Constitution. It gives the state of Oregon general parameters of what they can and can’t do. In this case, it deals with education funding.

If the initiative petition passes, then it is up to the Oregon Legislature to write statutes to carry out the Constitutional provisions. That’s where a huge amount of danger lies. Once an education statute is passed by the Legislature, it goes to the Oregon Department of Education to write the detailed rules to carry out the statute. An amendment to the Constitution requires Legislative and administrative rule action to follow.

There is nothing in this initiative petition that differentiates between those homeschoolers who opt-in to the program and those who don’t. In fact, giving homeschoolers money (even if it is just a portion of the homeschool community) provides a significant incentive for the Legislature to increase restrictions on homeschooling in Oregon.

The Legislature would still be free to add additional restrictions for funding recipients outside of these four protected areas. For instance, they might decree that any homeschooled child receiving funds would be prohibited from homeschooling if they dropped from an equivalent score of an A to a B in any subject. They might make some other harsh change to the definition of “satisfactory educational progress.” They could even mandate periodic home visits by State agents to verify that the children were being “properly educated” and not experiencing child abuse (this is a high priority proposal by those opposed to homeschooling, nationally).

Non-recipients would be liable to these types of restrictions plus additional ones in the four “protected” areas (protection only for funding recipients according to the proposed amendment).

The Legislature has the authority to impose these restrictions without justification if they are motivated to do so. Taking money away from public schools to give to parents would be highly motivating to our OEA-dominated legislature. The aim would be to drastically reduce the number of homeschooled students eligible to draw off funds from the public schools.

Some have asked what case laws we are looking at that would indicate these concerns are legitimate. Case law has nothing to do with the motivations of Legislators and their pro-public school supporters. What we do have is the record in history that a similar proposed Constitutional amendment in 1990 caused the public education establishment to be motivated to impose draconian regulations on homeschoolers. We see no reason to believe that today’s public school advocates would not be similarly motivated.

Shouldn’t Parents Have More Choices, Though?

We are not opposed to parents having choices. For the sake of homeschool freedoms, one of those choices MUST be completely free of government funding. By including homeschoolers in the language, the initiative petition muddies those waters and puts independent homeschoolers at risk for additional regulations from the Legislature.

If School Choice is So Bad, Why do Other States Do It?

Oregon, on the other hand, has a Legislature that has consistently defeated School Choice bills. By going over their heads at the ballot box with an initiative petition, they can only feel the money was taken from them unilaterally. They will be motivated to limit the damage, as our article explained.

Doesn’t the School Choice Amendment Set up a Separate Public Education Category That Does NOT Include Independent Homeschoolers Anyway?

Some have suggested that the Amendment intends to set up SCA accounts as a third public option and is not a threat to homeschool freedoms. However, the Amendment is silent on the establishment of any additional public school option.

There is no clear language indicating that establishing a SCA removes the child from either the private school law or the homeschool law. In particular, there is no clear indication that by taking SCA funds they would then become members of a third public school option. If that was the goal, the initiative has failed in that regard.

It’s also important to note that even if they HAD put language in the petition to attempt to block regulations on independent homeschooling, history has shown that the Oregon Legislature will see this attempt at getting public funds and proactively issue countermeasures that apply to all homeschoolers.

What Kind of Background and Insight does OCEANetwork Have on These Issues?

Wondering why you should listen to what we have to say about homeschool freedom issues? OCEANetwork volunteers have been working to protect and expand homeschool freedoms in Oregon for 35 years. We are involved year-round in actively monitoring legislation and other initiatives that may impact homeschool freedoms. You can find out more about us here.

Isn’t Opposing the Amendment Now Premature? Can’t We Wait and See What Happens and Hope for the Best?

Our answer above for the question “Doesn’t the Fact That it Will Change the Oregon Constitution Mean We Don’t Have to Worry About the Legislature?” explains why we sent out our alert now rather than waiting.

We cannot afford to assume it will pan out without any negative consequences. Homeschool freedoms in Oregon are hard-won and cannot be taken for granted. We are to be good stewards of those freedoms.

Did OCEANetwork Read the Actual Petition or Talk to the Organizers About Their Concerns?

We read the petition carefully, both in the draft and final forms. We have also talked at length with the petition organizers during the draft phase — explaining our concerns in detail — and, as stated in our alert, asked them to modify the language to remove independent homeschoolers from the petition in order to protect them. They refused to do so.

The intent behind the petition may be well-intentioned, but the result can and likely will lead to loss of freedoms. As explained in our post and alert, as well as this article from Homeschooling Backgrounder, history and experience show that School Choice initiatives will have a negative impact on homeschool freedoms in Oregon. Not because the intent of the petition organizers is bad (we all want parents to have more control) but because the government will always find ways to control “their” money, and the result is less control and freedom for parents.

What Can Homeschool Parents Do to Help Stop the School Choice Initiative?

We recommend that homeschooling families not participate in signing this initiative petition. We also recommend they vote No on the School Choice measure if it reaches the ballot box.

Helping others understand the impact that School Choice initiatives can have on Oregon homeschoolers is valuable as well. Sharing this post can help in that effort.