Help us spread the word about this update by sharing this post with your friends and homeschool groups.

NOTE: Sign up for emails from OCEANetwork to stay up-to-date on this and other issues impacting the freedoms of homeschooling parents in Oregon. 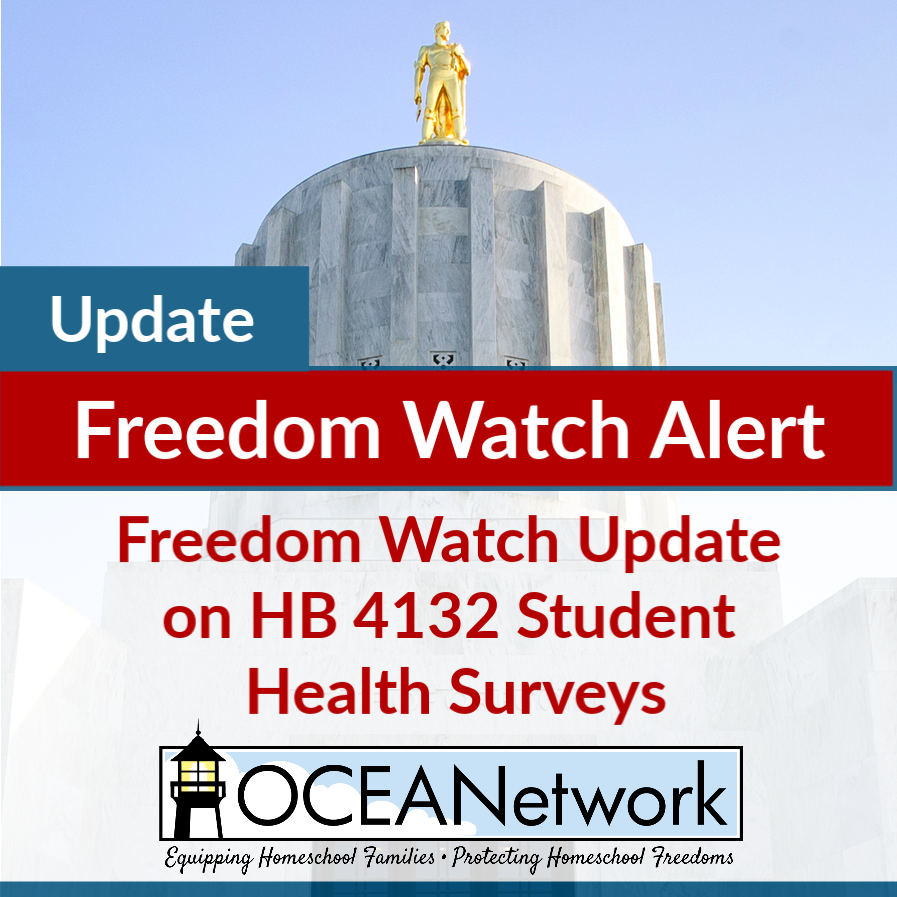 At the worksession for HB 4132, the Chair of the House Committee On Education, Rep. Margaret Doherty, established legislative intent by announcing: “One thing about the survey is, first of all, it never has and never will be for homeschoolers or private schools. They don’t get state money so they’re not part of the process, never have been part of the process.”

We are happy that homeschoolers will not be receiving these intrusive surveys. But Rep. Doherty used false logic in her rationale for that decision.

The funding in HB 4132 goes directly to the Oregon Health Authority (OHA). The money is used by the OHA to produce, distribute and report the results of the surveys. It does not go to the schools.

I asked the OHA’s Survey Coordinator, “Does the Oregon Health Authority pay schools in connection with the surveys, for instance for staff time spent on the surveys?” She replied, “No, we do not pay schools or provide incentives to participate in the survey.”

So state money going to homeschoolers and private schools was never an issue with this bill.

The legislative intent still stands. If they try to send surveys to homeschoolers, we can appeal to the courts to stop them.

After HB 4132 passed the Committee, Rep. Doherty sent out an email reply to those of you who had written to her: “There is misconception about this bill. Homeschoolers and private schools have never participated and there are no plans to have them be part of the healthy student survey.”

You, of course, already know that to be false from what I told you before. To be fair to Rep. Doherty, she herself may not have been aware of the details which follow. But the bill, as written, was left wide open for later unilateral changes to the Oregon Administrative Rules by the OHA.

When it became clear that those proposed amendments were not going forward (see the hole in the numbered amendments list — no amendment #5), I asked Rep. Smith Warner’s office what had happened. Her staff said to contact the Healthy Kids Learn Better Coalition (Coalition), the group requesting the bill.

I talked with the Chair of the Coalition by phone and asked why they opposed excluding homeschoolers. She said the existing Oregon Administrative Rules limit the surveys to public schools.

I pointed out that OARs can be unilaterally changed by the supervising state agency, in this case the Oregon Health Authority. Statute changes require the Legislature’s approval. So we wanted the homeschool exclusion in the statute.

She said the Coalition does not want to be limited by the statute, because they want to maintain their future flexibility. So the original wording and impact of the bill was not an unintended consequence. It was calculated and deliberate.

They wanted statutory authority to contact your homeschooled adolescents in the future to ask yet-to-be-determined personal questions relating to “health.”

The requesters of HB 4132 and the primary sponsor of the bill did indeed have potential plans to have homeschoolers be part of the healthy student survey. That is why they killed the amendments (#5) to exclude homeschoolers from the surveys.  No matter what Rep. Doherty says.

This would be a good occasion to thank the Lord for his protection of homeschooling families in Oregon.

“Some trust in chariots and some in horses, but we trust in the name of the Lord our God.”  — Psalms 20:7