SB 526 is a dangerous Oregon Senate bill which could end up sending licensed health care providers into homes throughout Oregon without consent. (Click here to download the text of the bill.)

It appears that SB 526 is connected to a proposal by the Governor and would only be for newborns. But the bill itself is written very broadly and could include every home in Oregon. 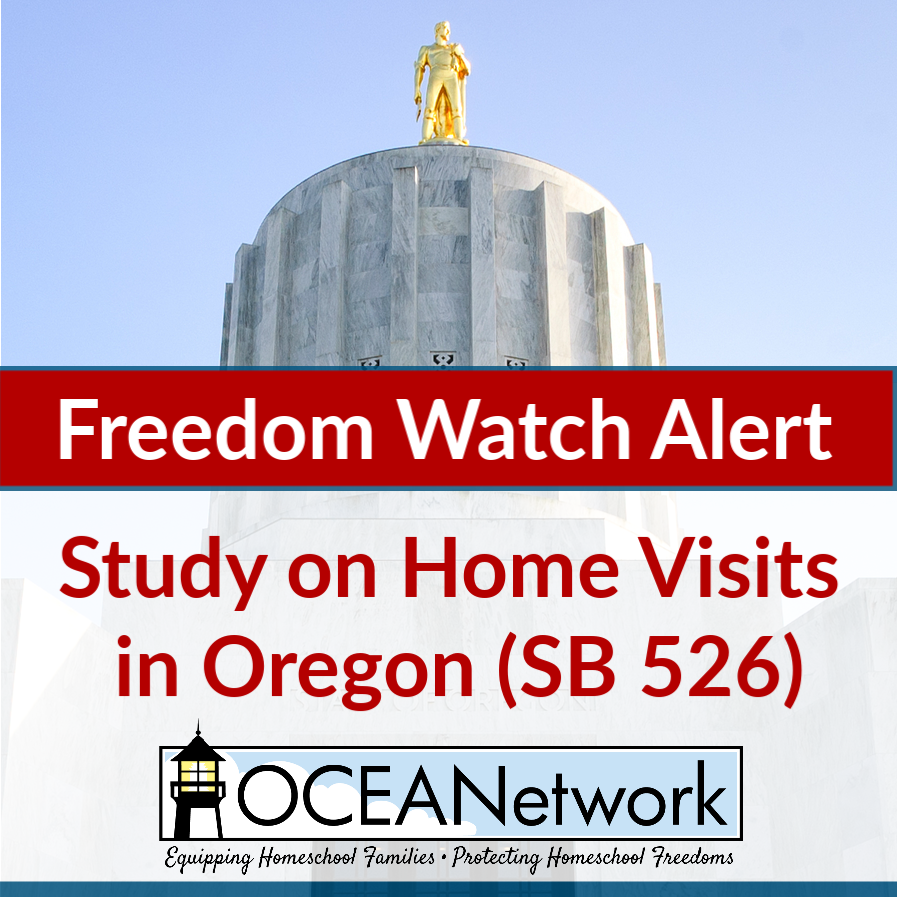 SB 526 authorizes the Oregon Health Authority to “study home visiting by licensed health care providers.” It does not specify any limitations on what types of home visit programs could be considered.

Specifically, mandatory programs are on equal footing with voluntary programs as far as the study and its recommendations are concerned, according to the bill language.

This article explains the difference in effects between voluntary and mandatory nurse home visit programs.

SB 526 is scheduled for a hearing this Monday at 1:00 p.m. before the Oregon Senate Committee On Health Care at the State Capitol. Please join us if you are able. Senate Hearing Room A.

Let your friends know so they can be heard, too.

Thank you for standing with OCEANetwork in defense of Oregon families.

OCEANetwork asked you, our homeschooling constituents, to tell the Oregon Senate Committee On Health Care to make sure that any State nurse home visiting program they established would be voluntary. They heard your voices and promised that their program would be voluntary, even though the initial bill did not mention the word “voluntary.”

The amended bill was passed out of the Health Care Committee and is now headed to the Joint Committee On Ways and Means.

The bill now says, “The authority shall design, implement and maintain a voluntary statewide program to provide universal newborn nurse home visiting services to all families with newborns residing in this state to support healthy child development and strengthen families.” It also says, “[T]he program must: (a) Be voluntary and carry no negative consequences for a family that declines to participate.”

OCEANetwork believes this strong protective language is a direct result of your messages to the Committee expressing concern that families not be forced to participate in the program against their will.

God sovereignly used your efforts for his good purposes:

The horse is made ready for the day of battle,
but the victory belongs to the Lord.
— Proverbs 21:31

Note that just because we are neutral on this amended version of the bill does not mean we think it is particularly benign. For instance, the visiting nurses will be gathering data on participating parents and their children for inclusion in tracking databases:

“The services provided in the program must: …Include an evidence-based assessment of the physical, social and emotional factors affecting the family.”

And “The authority shall collect and analyze data generated by the program to assess the effectiveness of the program in meeting the aims described in subsection (4)(d) of this section and shall work with other state agencies to develop protocols for sharing data, including the timely sharing of data with primary care providers of care to the families with newborns receiving the services.”

We will continue to monitor SB 526 and let you know if further action is necessary.

Thank you for standing with OCEANetwork defending the freedom for Oregon parents to do what is best for their children.

We are pleased to report that the Legislature is in agreement with OCEANetwork on such an important issue as Universal Nurse Home Visits. While we would have preferred this was more evident before Monday’s hearing on SB 526, we are happy with the results. (Click here to download the text of the bill.)

In the email we sent out last week, OCEANetwork asked you to tell the Senate Committee on Health Care that you wanted any home visit programs to be voluntary. SB 526, as written, does not specify that, and we are thankful for those who took action.

Before Monday’s hearing, there were no words like “voluntary” or “offered” (as opposed to “required”) being publicly used regarding home visits by either the Governor or the prime sponsor of SB 526. But on Monday, the bill supporters peppered their remarks with “voluntary” and “offered.”

So, what happened? Basically, the Committee scheduled the hearing on the original bad bill’s wording. The bill could have easily produced mandatory visits, according to the text.

However, at the hearing, the message was to disregard the weaknesses of this original wording and expect that everything will be detailed in an amendment to the bill later. Although the language for that amendment is not yet available, the assurance was that it will be Voluntary and Offered, not mandatory.

It is unusual (and bad form) that the Committee decided to hold the hearing on the bad bill itself and then say we will all know later what will be in the actual bill, rather than just wait until the bulk of the bill content was available before holding a hearing. However, we are hopeful that the amended bill will, in fact, include the language we desire. The OCEANetwork Freedom Watch Team will continue monitoring the situation to ensure that occurs.

You were diligent in asking that “voluntary” be added to the published bad bill. Thank you for your support.