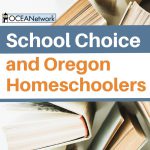 You might be surprised that a homeschool state organization like OCEANetwork is opposed to government money funding independent homeschooling. It is because we have been fighting for the freedom to independently homeschool since homeschooling became legal across Oregon in 1985.

What do those homeschool freedoms give you as the parent? Flexibility!

It is clear and evident that what government funds, government controls. The old proverb states, “He who pays the piper, picks the tune.” We’ve seen it time and time again in many aspects of our lives. The flexibility we love and the freedom we cherish will be lost when government starts to control homeschoolers.

Why, you might ask, would the government want to start controlling homeschoolers? Well, they will if we start taking government money.

Note that when we refer to independent homeschooling, it does not include those who are using charter schools. Different laws control these two kinds of education.

Independent homeschoolers direct the education of their children; they make choices of curriculum, assignments, pacing, etc.  And they pay for the educational materials.

This post describes the differences between independent homeschooling and educating through a charter school.

Why invite the government into your homeschool?

There are as many different reasons to homeschool as there are homeschool families. If you left the public schools because they aren’t a good fit for your child or you don’t like what or how they are teaching, why would you want to invite the government to have control of education in your home by taking government funding?

The idea that the government might try to control homeschooling if they funded it may seem strange to some. However, government has an obligation to make sure they are responsibly using taxpayer’s money. Even the School Choice people agree that there will be accountability.

In a recent poll regarding interest in School Choice, the Education Freedom for Oregon poll asked, “Who is accountable for private educational programs?” Their answer, “Some people are under the impression school choice programs do not have any accountability. However, all private choice programs have administrative, regulatory and financial accountability” (Education Freedom for Oregon’s Survey, screen capture September 14, 2021).

When anyone proposes giving homeschoolers money to homeschool, ask them, “What accountability will be included in the act or legislation to make sure the funds are spent responsibly?”  Their answers will be telling.

Often, the School Choice petition or legislation attempts to protect homeschool freedom by including wording like “neither the state nor local governments shall create any new laws or rules regulating nongovernment basic education nor make existing laws or rules more restrictive or burdensome, unless such a measure is referred to the voters at a general Election” (1990, Educational Choice Initiative).

However, it’s important to note that wording like this does nothing to protect independent homeschoolers from additional restrictions imposed by the Oregon Legislature. They still have the authority to change the definition of “satisfactory educational progress” and to impose other such changes that make homeschooling much more difficult in Oregon.

Homeschool freedom is on the line.

It’s summed up in the slogan we use during Home Education Week, “Homeschool Freedom Works.” If homeschoolers start taking School Choice funding, we no longer have the argument that the government shouldn’t control homeschools because we don’t take government funds.

We cannot take for granted our homeschool freedoms in Oregon.

“You don’t have to take the money.”

For example, a proposed Oregon Constitutional amendment in 2021 references “home schoolers” as one of the groups eligible to receive “School Choice” funding. It does nothing to define who those homeschoolers are. This is very dangerous. Unfortunately, the authors of this act refused to remove homeschoolers from the Act or even to clarify that the Act does not include independent homeschoolers.

We already have choice.

Those who wish to have the government fund their home education already have such a choice in Oregon. They can go through a charter school.

This quote from Nicki Truesdell (NickiTruesdell.com) sums up the situation nicely: “Americans need to stop thinking in terms of what kind of education the government will ‘let’ them have. We need to stop asking for choice. We already have it. Choice does not mean money. Oh, people think that’s what it means now. “School Choice” is code for “give me money to pay for the education I choose.” But choice simply means choosing something. It has absolutely nothing to do with how that something is funded.”