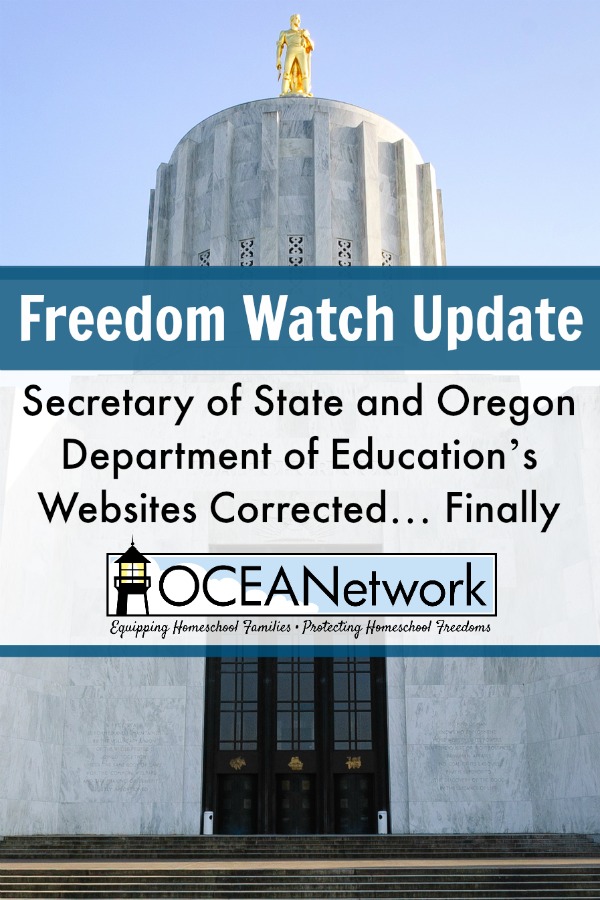 This has been a long process. When the Oregon Senate passed a bill lowering the compulsory attendance age from seven to six, homeschoolers were explicitly promised by the bill’s Sponsor and the ODE that we would not be impacted. When the bill was signed into law, the ODE wrote draft Oregon Administrative Rules (OARs) to implement the change. The draft ignored the promises made to homeschoolers and required homeschooled students to take all tests a year earlier. So the third-grade test was due when the student was eight years old rather than the previous age of nine.

OCEANetwork, with strong support from homeschooling families, convinced the ODE to correct the draft before submitting it to the Oregon Board of Education for approval. The Board approved the corrected draft.

But in an unexplained blunder, the ODE then sent the *original, uncorrected* draft to the Secretary of State’s office as the official homeschool administrative rule. Home School Legal Defense Association asked the ODE two or three times to send the corrected version to the Secretary of State but was refused. ODE’s workaround was that they notified the ESDs that the Secretary of State version was wrong. Of course, some ESD staff did not get the memo and recorded students as being in the first grade at age six. We do not know why the ODE was unwilling to directly correct the error.

OCEANetwork was finally able to identify a staffer inside the ODE who had the technical authority to correct the posted OAR and was willing to help. Even then it was a step by step, inch by inch process. There had to be a second “technical amendment” hearing and comment period, among other problems.

After the official Administrative Rule was corrected, we were in a position to ask the ODE to fix their own homeschool website information. That is now accomplished.

You can help OCEANetwork protect the freedom for Oregon families to do what is best for their children by becoming an OCEANetwork Supporting Family.